How to Increase Planned Gifts without Breaking the Bank: Affordable Solutions for Raising Donations 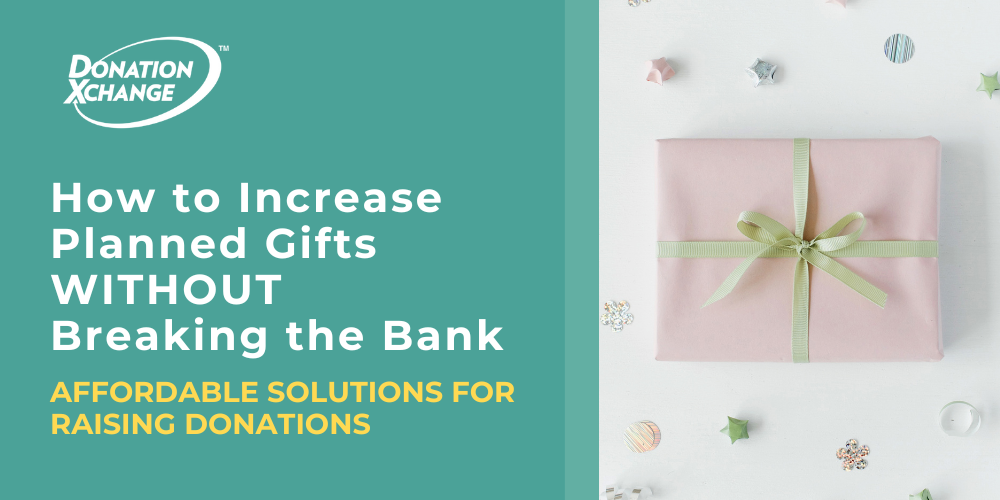 What is Planned Giving?

Planned giving refers to gifts to a nonprofit that are distributed after a donor passes away. Usually, these are contained in a will and direct funds to nonprofits that the donor cared about during their life—it’s a way for them and their family to honor the legacy of their loved one even after they are gone. These can take many different forms, which have a variety of benefits for both the donor’s family and the nonprofit.

Why Is Planned Giving Important?

Planned giving may seem like something you can’t impact as a nonprofit, but there are many reasons that a planned giving program is important for your nonprofit.

Depending on the type of planned gift, it may provide funding for your nonprofit over an extended period. This dependable, predictable income can be incredibly helpful for nonprofits as you are building budgets and planning for long-term impacts on your community. Consider the long-term impact when you are allocating resources for your planned giving program, as each gift can help support your mission for years to come.

Planned gifts can provide a significant tax benefit for donors. It may allow them to reduce the tax burden of their will and other distributions in it, as well as allow them to direct the money to a cause they care about rather than paying taxes on it. Many donors give planned gifts out of a desire to make a positive impact, but it can also have a helpful practical benefit for them and the family they leave behind.

Donors Can Designate How Gifts Are Used

For many donors, planned gifts are empowering. They allow donors to take a difficult event and make a positive impact out of it. Instead of feelings of powerlessness and fear surrounding their death, donors can feel good about the ways they will leave a legacy of hope after their passing. Donors often find deep meaning in being able to direct the money they have saved over decades towards the causes that mean the most to them.

Planned gifts can take many forms, and it’s important to understand the differences between the various options.

Some donors may also consider naming a nonprofit as a beneficiary of their retirement plan or life insurance policy. In this instance, the nonprofit would receive a percentage of the payout from these accounts in the case of the donor’s passing. This can be a simple way for donors without large additional assets to make a positive impact in the event of their death.

A charitable remainder trust involves a lump-sum gift to a nonprofit of real estate, cash, or securities. These are then reevaluated every year and the donor is paid a percentage of the value—another way to guarantee some income while making a positive impact. This can allow donors to protect their assets against inflation while still contributing a significant amount to a nonprofit they care about.

In a charitable gift annuity, a donor makes a gift of cash or securities in exchange for guaranteed income over a fixed period. This can be a retirement strategy before a donor passes as well as a way to support a nonprofit they care about. The nonprofit can invest the funds, and when the donor passes away they keep the remainder. It’s a way for both parties to benefit and to allow a retiree to make a positive impact in a time of life they still need to have a steady influx of funds.

When donors are setting up a planned gift, there are often a variety of types of assets they may donate to your nonprofit, each with different considerations you have to make.

Avoiding probate court proceedings is one reason for more complex or formal ways of donating assets to your nonprofit. These are included in a will to streamline the process of donating assets. Rather than waiting for an estate to go through probate court, these types of assets help your donors contribute funds quickly and simply.

Gifts like trusts, annuities, and securities are other ways that donors may give a planned gift. These are not gifts of cash and so come with certain legal requirements, restrictions, and reporting needs. However, despite the additional considerations, this can be a very effective way to donate part of their assets to a nonprofit.

This category includes real estate, physical items, and other assets that don’t fall into other categories but can be held and eventually sold to benefit the nonprofit.

How Is a Planned Gift Different from a Memorial Fund?

Planned giving and a memorial fund are often confused but are separate categories. Planned gifts are set up before someone has passed as a way for them to distribute their assets and make an impact on the causes they care about. Memorial funds, on the other hand, are set up after someone passes to give their friends and family a way to honor that person’s life. Donations are typically collected for a nonprofit the person cared about as a way to appreciate them and their legacy.

How to Launch a Planned Giving Program

Get the team on board.

Aim to explain through anecdotes, examples, and larger numbers that showcase both the human impact and the financial implications of a planned giving program. Help your team understand what role they can play—your board of directors may be a good test case of people who are interested in setting up a planned gift.

Identify current donors who may be planned giving prospects.

You likely have current donors that may be interested in planned giving. Focus on donors who are older and nearing retirement that may have assets they would like to distribute. Donors who have been consistently engaged over time are also a good fit, especially if they’ve regularly given and volunteered over years. Those are the kinds of donors who want to support your mission—they may not have the means to give a major gift now, but putting together a planned gift may allow them to contribute a significant sum.

Create a marketing strategy for your planned giving program

Find ways to promote your planned giving program as part of your overall marketing strategy. You can include a mention in some of your other donation materials as well as special outreach to the target group.

Feature acknowledgments for donors who notify you of planned gifts.

Another way to incorporate your planned giving program into your communications is by acknowledging donors who notify you that they’ve included the organization in their planned giving. Consider sharing a quote from that donor and a brief story about their engagement as both a thank you and a way to highlight how others can support your mission.

How to Find The Right Donors for Planned Giving

Figuring out which of your current donors are a good fit for your planned giving program can be difficult, but there are a few main criteria you can use to narrow down your list.

The older your donor, the more likely they will be a good fit for your planned giving program. Donors who are approaching retirement or in retirement may be thinking deeply about their will and how they will distribute their assets after they pass. However, don’t disregard some of your middle-aged donors—as they plan for retirement, they may be interested in incorporating planned giving into their strategy for income and impact in their retirement. Generally, donors over 45 or 50 are going to be the best fit for many planned giving marketing initiatives.

Commitment to the Nonprofit

Long-term, consistent supporters of your nonprofit are often interested in planned giving as another route to support the cause they care about. When a donor is consistent and engages in multiple ways like giving, sharing about your work online, and volunteering, they are more likely to include your nonprofit in their planned giving portfolio. Segment your donor population by donors who have been giving for the longest period of time and consider your most engaged supporters when putting together your planned giving program.

Donors who give regularly are also good candidates for your planned giving program. Monthly donors and donors who have faithfully supported your organization for years are often interested in supporting your work through planned giving and other initiatives. This allows them to make a greater impact, even if they may not have the means for a major gift at this moment.

How to Promote a Planned Giving Program at Your Nonprofit

Given the age demographic of most donors interested in planned giving, direct mail can be an effective way to reach out. Take care that your direct mail gives people easy, concrete next steps. You can direct them to call a representative for more information, request an informational packet, visit a webpage, or attend an educational event. Most donors will need some time to think about their planned giving, so make sure that your direct mail helps them start that decision-making process.

Focus on Emotion, not Logic

Make sure your call-to-action is a manageable next step. Offer educational opportunities, a packet of information, a conversation with a staff member, or something similar. Focus on getting people to think about planned giving more than making a commitment at that exact moment.

Create a Webpage for Your Planned Giving Program

Add an informational page about how your donors can get started with a planned gift. Be careful to add a disclaimer about any tax or legal statements you make—however, you can use this page to give people more information, collect information about those who are interested, and drive traffic from other marketing efforts.

Consider having a staff member designated to discuss planned giving with donors. Have them sit down with donors who are interested to talk about how they could designate funds for the area that means the most to that donor. Again, be careful to keep any legal and tax advice general and direct them to a qualified expert for any detailed questions to avoid any issues.

Invite your planned giving prospects to an educational event to learn more about planned giving options and strategies to reduce tax liability in retirement and when distributing your estate. You can connect with a CPA or lawyer who supports your mission and ask them to be your speaker. Donors will appreciate the chance to learn more—and it’s a great way to keep your nonprofit top of mind as they plan for retirement and beyond.

Finding the Right Tools for Your Planned Giving Program

A variety of planned giving solutions exist, but the most important thing you need is a good relationship with your donors. Make sure you can integrate your donation history into your donor database—online donation tools like CharityGiving help make this easy. Your corporate partners can also be a good source of possible planned giving prospects. If you work at a company with a robust CSR program, consider working with your nonprofit partners on an educational event that helps your employees understand the impact they can have through planned giving.

Because of the incredible potential of planned giving, make sure you’re consistent in communicating and education your donors about the options available to them. Even a single planned gift can transform the possibilities for your nonprofit—invest now and see how it pays off, allowing your organization to have an even greater impact.

Looking to set up an effective online donation tool without the high fees? Reach out today to learn more about CharityGiving and DonationXchange, our tools for charities and CSR programs to have an even bigger impact on their communities!